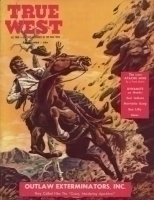 True West Magazine - Initially owned by Western Publications, True West began publication in 1953. Two years later, the company purchased Frontier Times, which had existed under several names since 1910. Frontier Times provided historical eye-witness accounts from numerous individuals who who actually lived during the last days of the Wild West. In the early and mid-1900's, western history was extremely popular, including a number of movies and television programs such as Bonanza, The Lone Ranger and Gunsmoke. With so many fans becoming interested in finding out about the lives of real cowboys and cowgirls, Western Publications soon began a number of other western publications, such as Old West in 1964, Relics in 1967, Gold! in 1969, Badmen in 1971, and Horse Tales in 1972. Of these many publications, only True West survives today.

Now owned by Bob Boze Bell, historian and Old West enthusiast, the magazine is published in Arizona. The publication continues to capture the spirit of the American West with authenticity, personality and humor, bringing the Old west to life and linking it the present. Today, it is the world's oldest, continuously published Western Americana magazine. See True West's official website HERE.  And enjoy browsing our collection of vintage True West Magazines.