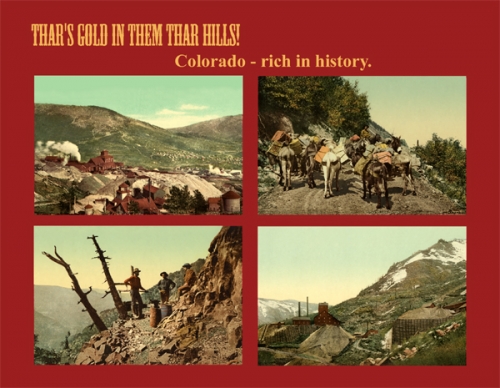 Colorado Gold Rush Postcard - Custom original only available at Legends' General Store. Text on back: Beginning in 1859, the Colorado Gold rush lasted throughout the early 1860s and is considered to be the largest gold rush in american history. For decades, prospectors flooded the rocky Mountains, creating numerous early towns which ultimately led to the creatio of Colorado Territory in 1861 and the State in 1876. Today, many of these old settlements have disappeared or become ghost towns, while others continue to thrive. The photos depected on front include Cripple Creek Mines and Aspen Silver mines first published at the turn of the century.