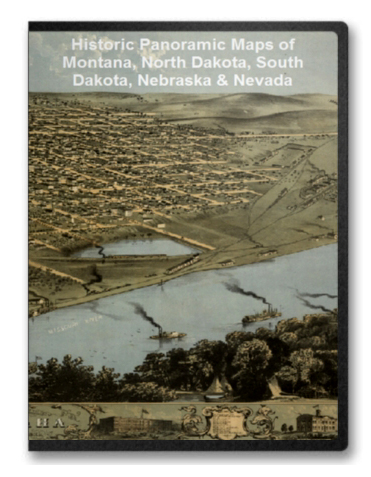 The panoramic map was a popular cartographic form used to depict U.S. and Canadian cities and towns during the late nineteenth and early twentieth centuries (1847 to 1929.) Known also as bird's-eye views, perspective maps, and aero views, panoramic maps are nonphotographic representations of cities portrayed as if viewed from above at an oblique angle. Although not generally drawn to scale, they show street patterns, individual buildings, and major landscape features in perspective.

Each map image on this CD is a very high resolution scan of an original panoramic map. Original maps were often as large as 36" x 36" or even larger. To offer all these maps at 100% detail, they are stored in either MRSid format or in JPEG 2000 format and require special viewers to be able to view all the details in these superb historical maps. Viewers and full viewing instructions for both Windows and Macintosh computer platforms are included on this CD.  Maps may be viewed on your computer or printed out. The software will allow you to size the maps to any level of detail you wish and either print out the entire map or just a portion of it.