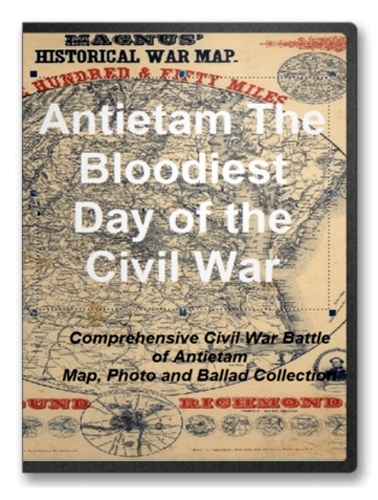 Antietam - The Bloodiest Day of the Civil War - This CD contains a large number of rare historic maps and descriptive pages, photos and a ballad representing fascinating details pertaining to the Battle of Antietam during the Civil War.

General Robert E. Lee's first invasion of the North culminated with the Battle of Antietam, in Maryland (or Sharpsburg, as the South called it). The battle took place on Wednesday, September 17, 1862, just 18 days after the Confederate victory at Second Manassas, 40 miles to the southeast in Virginia.

Not only was this the first major Civil War engagement on Northern soil, it was also the bloodiest single day battle in American history. To view the magnitude of the losses, consider that Antietam resulted in nine times as many Americans killed or wounded (23,000 soldiers) as took place on June 6, 1944--D-day, the so-called "longest day" of World War II. Also consider that more soldiers were killed and wounded at the Battle of Antietam than the deaths of all Americans in the Revolutionary War, War of 1812, Mexican War, and Spanish-American War combined.

The loss of human life at Antietam shocked both sides doing battle that day. And it nearly resulted in Lee's entire army, with its back to the Potomac River, being cut off from retreat across the Potomac (through Shepherdstown) and being captured by the stronger Union forces.

The battle also became a turning point, an engagement that changed the entire course of the Civil War. Antietam not only halted Lee's bold invasion of the North but thwarted his efforts to force Lincoln to sue for peace. It also provided Lincoln with the victory he needed to announce the abolition of slavery in the South. And with that proclamation of Emancipation, Lincoln was able to broaden the base of the war and may have prevented England and France from lending support to a country that engaged in human bondage. The battle sealed the fate of the Confederacy.

Maps are in MrSid format, which allows you to see the entire map on your computer screen or drill down to see the smallest details. The original maps are often quite large, as much as 36" wide and quite detailed. With the MrSID software, you can manipulate the map to print the entire map in great detail or zoom into a portion of the map in full detail for viewing or printing. The software in included in the CD.