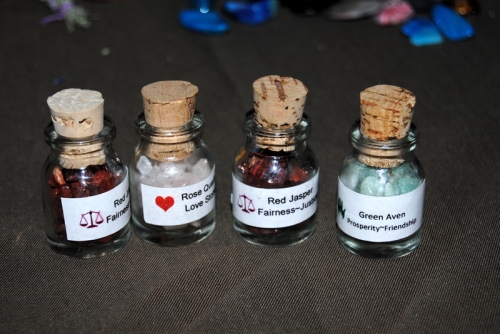 Choose from the following.

Also called the Sobriety Stone and the Master Healing Crystal, Amethyst Ranges in color from light, slightly-pinkish violet to deep purple, Amethyst is a powerful and protective stone, while at the same time acts as a natural calming agent has healing and cleansing powers.

Emotionally, it relieves stress, soothes irritability, balances mood swings, and dispels anger, fear, negativity, sadness, and anxiety. It is a good crystal in healing personal losses, grief, and helping to bring peace, happiness, and contentment during transitional periods. Placing it under the pillow helps insomniacs and induces prophetic dreams.

It is called the Sobriety Stone as it has a sobering effect on overindulgence of alcohol, smoking, drugs or other addictions. Physically, it boosts hormone production, strengthens the immune system, cleanses blood, eases headaches and other pain, reduces swelling, heals skin conditions, respiratory issues, and more.

Fine amethysts have been set in religious jewelry and royal crown jewels for ages. It was once considered equal in value to ruby, emerald, and sapphire. Because of its wine-like color, early Greek legends associated amethyst with Bacchus, the god of wine.

Also known as Heliotrope is a deep, earthy green gem emboldened with spots of bright red that is an excellent blood cleanser and a powerful healing stone. It heightens intuition, increases creativity, is grounding and protecting. It gives courage, assists in living in the present moment, calms and revitalizes the mind, dispels confusion and enhances decision-making. It also reduces irritability, aggressiveness and impatience.

Physically, Bloodstone purifies and fortifies the blood, making it ideal for anemia. It neutralizes toxins and detoxifies the liver, intestines, kidneys, spleen and bladder and helps in healing inflammations and infections.

In the ancient world it was considered to be the most beautiful of the Jaspers and was called the Sun Stone, and later Christ’s Stone. The most widely known legend comes from the Middle Ages and claims the “Blood Stone” was formed at the crucifixion of Jesus Christ, when the blood of his wounds fell onto the dark green earth and turned to stone.

An ancient amulet of luck, Carnelian is an orange-colored variety of the agate Chalcedony, a mineral of the Quartz family. Its color varies from pale pinkish-orange to a deep rusty brown, though it is most known for its brilliant orange and red-orange crystals. Like all agates, it has protection energies against fear, envy, and anger, and dispels sorrow, negativity, and apathy and is useful for overcoming abuse of any kind.Carnelian is also a stabilizing stone that restores vitality and motivation and stimulates creativity and initiative.

Physically, Carnelian treats lower back problems, rheumatism, arthritis, neuralgia and depression. It regulates the kidneys, and accelerates healing in bones and ligaments, improves vitamin and mineral absorption and ensures good blood supply to organs and tissues.

In ancient times, as well as today, Carnelian is believed to help the timid to become eloquent and bold. Ancient Warriors wore Carnelian around their neck for courage and physical power to conquer their enemies. It was also worn to enhance passion, love, and desire.

Jasper is a variety of Chalcedony, a mineral of the Quartz family, and called by several different names, can be found in a variety of colors from brown, red, orange, yellow, green, white lilac, and more. Known as the “supreme nurturer”, Jasper  is a stone of grounding and stability, providing comfort and security, strength and healing.

It sustains and supports through times of stress, and brings tranquility and wholeness. It provides protection, absorbs negative energy, encourages honesty with one's self, courage to assertively tackle problems, aids quick-thinking, stimulates the imagination, and transforms ideas into action.

Physically it is good for the liver, gallbladder, soothing to the stomach, supports during prolonged illness, re-energizes the body, and prolongs sexual pleasure.

Fancy Jasper intensifies and lightens the feeling of well-being, helping one to lighten up and enjoy themselves more, yet in a subtle way. It can relieve fear, frustration and guilt, building an inner strength and confidence. It is a particularly good stone for bringing energies of wholeness and healing to an environment or situation.

Historically, Jasper is traceable to all ancient peoples and civilizations. Worn by shamans, priests and kings, it was considered sacred and a powerful protection stone, for both the physical world and in the spiritual realm. Amulets of Jasper were carved by the Egyptians with symbols and inscriptions from the Book of the Dead and buried with mummified remains for safe passage in the after life.

Also called Cinnamon Stone and Warrior's Stone, Garnet is most often seen in red, but can also be pink, green, orange, yellow, brown and black. It is the stone of commitment and represents love.

A stone of regeneration and energizing, Garnet inspires and revitalizes feelings of love and enhances sexuality, bringing warmth, devotion, understanding, trust, sincerity and honesty to a relationship. It is a good stone for depression, bringing joy and hope to its user, and helps lessen anger, especially toward oneself.

Physically, it is a purifier for the entire body, regenerates blood, heart and lungs, treats disorders of the spine and other bones; and boosts the immune system and energy levels.

Thousands of years ago, red garnet necklaces adorned the necks of Egypt’s pharaohs, and were entombed with their mummified corpses as prized possessions for the afterlife. In ancient Rome, signet rings with carved garnets were used to stamp the wax that secured important documents.

Also called Chrysolite and Olvine, Peridot ranges in color from a brown-green color to yellowish green to pure green, Peridot is a powerful cleanser that releases and neutralizes toxins on all levels. It is also a stone of compassion that has a friendly energy and is excellent for healing. Emotionally, it protects against nervousness, alleviates jealousy and resentment, reduces stress, anger and guilt; enhances confidence and motivation.

Peridot has always been associated with light. In fact, the Egyptians called it the “gem of the sun.” Some believed that it protected its owner from “terrors of the night,” especially when it was set in gold. Others strung the gems on donkey hair and tied them around their left arms to ward off evil spirits.

Jasper is a variety of Chalcedony, a mineral of the Quartz family, and called by several different names, can be found in a variety of colors from brown, red, orange, yellow, green, white lilac, and more. Known as the “supreme nurturer”, Jasper  is a stone of grounding and stability, providing comfort and security, strength and healing.

It sustains and supports through times of stress, and brings tranquility and wholeness. It provides protection, absorbs negative energy, encourages honesty with one's self, courage to assertively tackle problems, aids quick-thinking, stimulates the imagination, and transforms ideas into action.

Physically it is good for the liver, gallbladder, soothing to the stomach, supports during prolonged illness, strengthens and detoxifies the circulatory system, re-energizes the body, and prolongs sexual pleasure.

Red Jasper is a gently stimulating and extremely protective stone. It brings problems to light, provides insights, and rectifies unjust situations. It grounds energy, calms the emotions, and aids in dream recall. A Red Jasper stone is said to be a very lucky gemstone for actors and artists as it aids in the expression of creative ideas.

Historically, Jasper is traceable to all ancient peoples and civilizations. Worn by shamans, priests and kings, it was considered sacred and a powerful protection stone, for both the physical world and in the spiritual realm. Amulets of Jasper were carved by the Egyptians with symbols and inscriptions from the Book of the Dead and buried with mummified remains for safe passage in the after life.

Though most commonly green Aventurine also forms in blue, red to reddish-brown, purple, orange or peach, yellow, and silver gray. Known as Green the “Stone of Opportunity,” it is thought to be the luckiest of all crystals, especially in manifesting prosperity and wealth. As a stone of prosperity, it reinforces leadership qualities and decisiveness and encourages perseverance. It also promotes compassion and empathy, stabilizes the state of mind, stimulates perception, enhances creativity, calms anger and irritation, and promotes feelings of well-being..

In ancient times, the Tibetans decorated their statues with Aventurine, using it most often for the eyes to symbolically increase the statue’s visionary powers. Until the 19th century, Aventurine was called the “Stone of the Amazons,” because the Brazilian deposits were believed to have supplied jewels and talismans for the Amazonian warriors. It has been used in rituals of the medicine wheel to show the spirit guides the connection with the healing light of the heart.

A variety of Chalcedony Quartz, Moss Agate is an excellent stone for rebalancing and harmonizing the body, mind and spirit. it promotes inner stability, composure, and maturity and has warm, protective properties that encourage security and self-confidence. Agate is useful as a protection amulet when traveling.

Moss Agate which can be found several colors including green, blue, red, yellow, and brown has all the
generic healing properties of Agate and Chalcedony and is known as a stone of new beginnings, refreshing the soul and enabling an individual to see the beauty in their surroundings.

It attracts abundance in wealth, improves self-esteem, develops strength and the ability to get along with others, promotes self-expression, and communication, balances emotions, releasing fear and stress. It eliminates depression caused by brain imbalances.

Physically, it speeds up recovery from illness, is anti-inflammatory, cleanses the circulatory and elimination systems, and boosts the immune system. Moss Agate prevents hypoglycemia and dehydration, treats infections, colds and flu, and lowers fevers. Treats fungal and skin infections.

Throughout history and all cultures, Moss Agate has been known as the crystal of gardeners and agriculture. It was considered a miraculous healing stone for tribal priests of the past, giving them power to interact with our human organic system, and was used as a talisman to make warriors strong and victorious.

Also called Clear Quartz or Rock Crystal, Quartz Crystal is known as the "master healer" and will amplify energy, clarity, and balance. Ann all purpose healer,

It absorbs, stores, releases and regulates energy, draws of negative energy of all kinds, and balances and revitalizes the physical, mental, emotional and spiritual planes. It aids concentration and unlocks memory.

Physically, it enhances the organs, stimulates the immune system and has been used to treat migraine headaches, vertigo, and motion sickness, and is believed to assist with metabolism, exhaustion, and weight loss treatment of digestive disorders, kidney and bladder infections, and to cure diarrhea.

Throughout history, Clear Quartz has been valued by nearly every civilization as far back as Atlantis and Lemuria, where the sun's power was believed to be harnessed through a crystal as a source of solar energy refraction. They, along with Native American Indians, African tribes, ancient Egyptians, Aztecs, Romans, Scots and countless other cultures used Clear Quartz in diagnostic healing, meditations and spiritual development, as religious objects and in funerary rites, and to dispel evil and magical enchantments.

Called the Love Stone or Heart Stone, its color ranges from very light pink (almost white) to medium-dark pink. Also known as Pink Quartz and Bohemian Ruby, this stone of universal love restores trust and harmony in relationships, encourages unconditional love, self-love, and friendship. Calming and reassuring, it helps in deep inner healing, brings feelings of peace, and comforts in times of grief. It also dispels negativity, encourages self forgiveness and acceptance.  It is quite effective in attracting new love, romance and intimacy, or in developing a closer bond with family or friends.

Rose quartz is known to have been used by the Assyrians and the Romans in jewelry dating back to 800-600 BC. Egyptian and Greek civilizations used quartz crystals as potent talismans. In the Middle Ages, medical practitioners used quartz in their healing potions and early cultures of the Americas used quartz amulets.