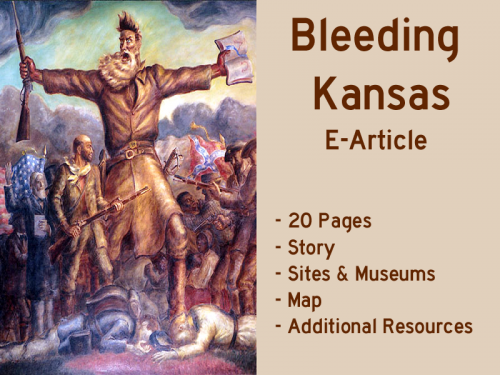 Bleeding Kansas, also known as the Kansas-Missouri Border War, was a series of violent events that took place between 1854 and into the Civil War, between anti-slavery Free-Staters and pro-slavery advocates.

What an interesting piece of history to explore! Did you know that most historians believe that the Civil War began as a result of what has become known as "Bleeding Kansas?" When the Kansas-Nebraska Act allowed the Kansas Territory to be settled and eventually become a state, there were a lot of people who fervently believed that by the state becoming a "Free-State," the tides could be turned in the ongoing issue between pro-slavery advocates and abolitionists. No sooner had the territory been approved for settlement when eastern anti-slavery groups began to populate the area with supporters. Alternately, southern supporters saw the same opportunity and a flood of pro-slavery supporters rushed in from nearby states, especially Missouri.