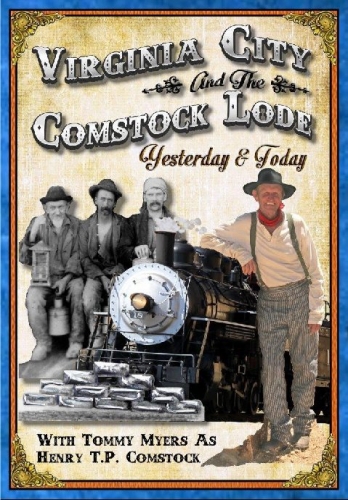 SKU: VCComstockDVD
Stock: Out of Stock

This is the most comprehensive video of the area ever produced. Narrated by Henry T.P. Comstock, portrayed by long-time local, Tommy Myers, you'll learn the fascinating story of the discovery of the Comstock Lode, and travel with him through the years as he shares the remarkable adventures of Mark Twain, the Bonanza Kings, Adolph Sutro, the Grosh brothers, Philip Deidesheimer, Eilley Orrum and Sandy Bowers, and many more. Forty minutes of this menu-driven, 2½ hour production are devoted to the history of the Virginia & Truckee Railroad, and you'll ride the "Queen of the Short Lines" as she travels the rails between Virginia City, Gold Hill and Carson City. Comstock gives a fascinating tour of Virginia City, Nevada, visiting all the significant buildings, saloons, mansions and museums, spending time with a few ghosts along the way!

Virginia City! This was once "The Richest Place on Earth!" and grew to fame as the site of the discovery of the Comstock Lode - the first major silver strike in teh United States. Henry T.P. Comstock, the irascible character for whom the lode was named, will take you on an excitiing journey where you'll experience the discovery of the Comstock Lode in 1859, and how hard rock mining was re-invited here, producing over 56 billion, 500 thousand dollars in silver and gold in just 20 years.  Henry Comstock, protrayed by Tommy Myers, will introduce you to all the extraordinary peoople who lived here, including Mark Twain, who made his name on the "Territorial Enterprise" newspaper. You'll see the ingenious water system Herman Schussler designed to bring water to Virginia City from Marlette Lake and visit enchanting Bowers' Mansion. You'll discover Phillip Diedesheimer's method of square-set timbering, and Adolf Sutro's three mile tunnel.

Over 40 minutes of this 2 1/2 hour program is devoted to the history of the Virginia & Truckee Railroad; you'll ride on the short line, and also experience the longer excursion from Carson City to Virginia City. Once there, Henry Comstock will take you on a tour of all the significant buildings in Virginia City, recounting their history, most built after the Great Fire of 1875. You'll also take a side trip to Carson City to visit the Nevada State Museum and former mint, as well as the Nevada State Railroad Museum.

The greatest silver strike, even bigger than the Comstock Lode, was the Big Bananza, and you'll hear the amazing story of how John MacKay, James Fair, James Flood and William O'Brien struck it rich in 1873 when everyone thought the Comstock mines were played out.

Virginia City came out of "borrasca" in 1959, when the television series, "Bonanza" premiered on NBC. Ever since then, this rascally town has become a favorite destination for FUN! Virginia City and The Comstock Lode gives you an insider's view of all the bars, museums, and rambunctious, rollicking events that occur here, including the Camel Races, Ferrari Hill Climb, Virginia City Motorcycle Grand Prix, Christmas on the Comstock, Outhouse Races, Steampunk Ball, Rocky Mountain Oyster Fry, Firemen's Muster and more.

It's no place like home! - Virginia City and the Comstock Lode, Yesterday & Today