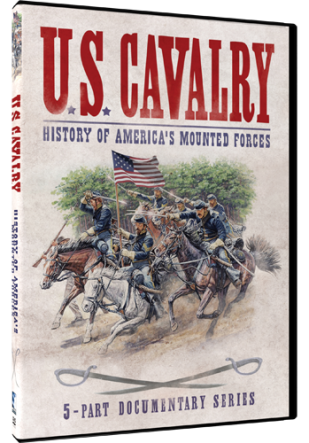 From the creators of the best-selling documentaries UP FROM SLAVERY, VIETNAM: 50 YEARS REMEMBERED, and LAWMEN OF THE OLD WEST

Mount up! The cavalry has been part of America's history from before the nation was founded and is still in service today. Charge into the fight with this 5-part series chronicling one of the most important branches of the military.

From the horse-mounted regiments that birthed our nation to the armored machines paving the front lines, cavalry units have changed warfare and the outcome of battles for over 200 years. Learn about their traditions and legacy in U.S. CAVALRY!

Origins to America's First Wars
Learn about the first cavalries assembled by the Greeks and their historical importance leading to the formation of the first regiments in the New World that will fight for independence and win the Civil War.

Indians, Custer, & The West
Go West as the United States expands and pushes into new territories in detailed accounts of Wounded Knee, the Battle of the Little Bighorn, and creation of the Buffalo Soldiers.

The Rough Riders and a New Horse
Charge into the fight with Teddy Roosevelt as he leads troops into Cuba and the battlefield begins to change when new innovations create a new horse that will change the world.

Patton & World War II
Join the General who will revolutionize the cavalry and lead it from the last battle fought on horses to modern tanks and inventions that will win WW2 and be the next generation of armored cavalry.

The Modern Cavalry
Ride with the air cavalry and regiments that have fought in Vietnam, Iraq, and on today's front lines. The U.S. Cavalry is still an example of excellence, full of pride and tradition, that are critical to our armed forces.