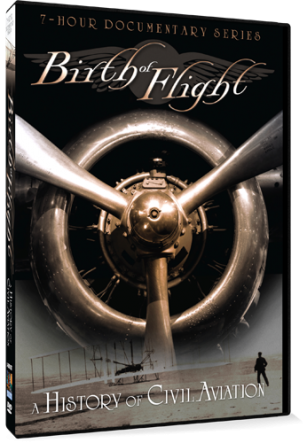 BIRTH OF FLIGHT (A History of Civil Aviation) 3 Disc DVD

BIRTH OF FLIGHT (A History of Civil Aviation) 3 Disc DVD

A Complete Chronology of the World of Aviation!

From the exhilarating and perilous days of early fight, to the present, where travel on commercial flights all over the world is as common as travel by car, this program chronicles the complete history of the airplane and the persons who have had the biggest impact on the world of aviation including: Wilbur and Orville Wright, Henri Fabre, Sir Frank Whittle, William E. Boeing and many more!

When the Wright brothers successfully took to the sky in 1903, the world paid attention. Civil aviation has since developed into a multi-billion dollar industry capable of transporting passengers from anywhere, every hour of every day. We look at the incredible history and development of civil aviation in this series. From Lindburgh through to modern marvels such as the Boeing 787, this 8-part series explores the amazing world of aviation!

EPISODE 1 - This program looks at the beginnings of flight, with innovators such as Benjamin Franklin and Leonardo DaVinci coming up with new ways to give man wings, and chronicles the invention of hot air balloons, Zeppelins, box kites, and of course the story of the most influential inventors of all - Wilbur and Orville Wright

EPISODE 2 - The first decades of aviation brought both triumph and tragedy. A new breed of adventurers looked to the heavens for their challenges, and thrilled audiences around the world. The advent of the movie camera meant that their exploits could be broadcast to every corner of the globe, and recorded for posterity.

EPISODE 3 - The decades following the First World War saw air craft designers pushing the boundaries of aeronautical technology, moving the industry forward at a rapid pace. With new commercial markets opening up, it was the visionaries who held the key to success.

EPISODE 4 - The years following the First World War saw flying take off as business. Flying became a bigger feature of life all around the world, not just as a novelty adventure for rich people but as a mode of transport available to just about anyone.

EPISODE 5 - Seaplane development went from strength to strength, with Seaplanes becoming the largest aircraft in the world by the end of the First World War. Seaplanes saw the dawn of the aviation industry as they could accommodate large numbers of passengers between continents, and only required a smooth body of water to land.

EPISODE 6 - Flying at the speed of sound was made a reality when traditional rivals Britain and France collaborated to build the world's first Concorde, a jet that could traverse the Atlantic in just 3 hours, at twice the speed of sound, around about 1400 miles an hour!

EPISODE 7 - The Boeing 737 twin engine jetliner was to become Boeing's greatest success because of the fact that it has one of the lowest approach speeds of any jet transport and the minimum equipment required for refueling.