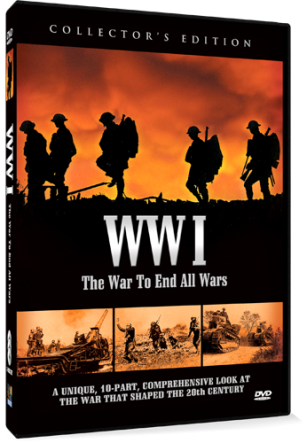 WWI (THE WAR TO END ALL WARS) 3 Disc DVD

WWI (THE WAR TO END ALL WARS) 3 Disc DVD

WWI: The War To End All Wars is a unique, 10-part, comprehensive look at the war that shaped the 20th Century. Through rare, actual battle footage and rare veteran interviews, The War To End All Wars takes you from the assassination of the Austrian Arch Duke in 1914, to the final desperate battles of 1918. Unique and stunning, you will go-over-the-top on the Western Front and witness the carnage in Russia. You'll take to the skies in the world's first air war and ride with the legendary Lawrence of Arabia.

This is more than a historical or military account of WWI, it is a riveting and personal account of a defining moment in world history. Never before in the history of the world had so many countries fought on so many far-flung battlefields. Never had so many soldiers lost their lives. Never had there been such an unending hell-on-earth. Never has there b such a remarkable look at 'The War to End All Wars'.

1. With Flags Waving
2. The Battle of the Frontiers
3. The Taxis of the Marne
4. A War of Chemicals and Engineering
5. Flyboys
6. Citadel
7. Distant Fronts
8. Revolt
9. Changing Tide
10. End Game