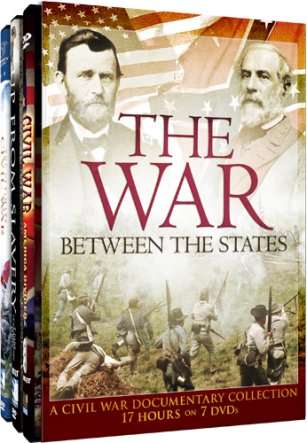 Featuring Over 17 Hours of Best-Selling Documentaries!

Experience the historical and personal impact of the Civil War in this definitive 7 DVD collection! This epic commemoration of the 150th anniversary of the outbreak from Confederate forces transports viewers directly to the frontlines of the most historically significant battles of this fascinating war. Through historical photos, masterfully crafted battlefield re-enactments and expert commentary gain perspective and depth to the war that divided a nation!

•Up From Slavery – The History of Slavery In America
–Examines the history of slavery in America, from the arrival of the first African slaves through Nat Turner's Rebellion to the Civil War and beyond!
The Ultimate Civil War Series and Up From Slavery were produced by Award-Winning Documentarian, Kevin Hershberger.

Filled with interviews and reenactments from renowned historians and experts!