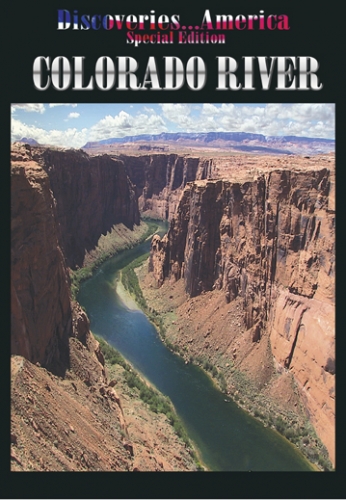 Discoveries...America Special Edition, Colorado River - The scenery in Arizona's Glen and Grand Canyons is some of the most spectacular to be found along the Colorado River's 450 mile passage through 6 states. Man has changed the river considerably since the days when John Wesley Powell first explored the Colorado River. Fifteen miles upriver from Lee's Ferry to the Glen Canyon Dam there is a pristine trout fishery of world class proportions. Downriver from Lee's Ferry, spectacular whitewater rafting through the Grand Canyon. Take a look back in time with historic footage of Georgie Clark, the "Old Woman Of The River", who was the first woman to swim the river and the first woman to run guided trips down the Colorado River. Experience the awe of the giant California condors released along the Colorado River to reintroduce the specie to the lands from which they were nearly extinct. Talk with the field manager of the California Condor Restoration Project about their progress. Visit the rim of the Grand Canyon at sunrise for a truly inspirational perspective. Fly fish the Glen Canyon with Lee's Ferry Angler's guides Terry Gunn and Jeff English.