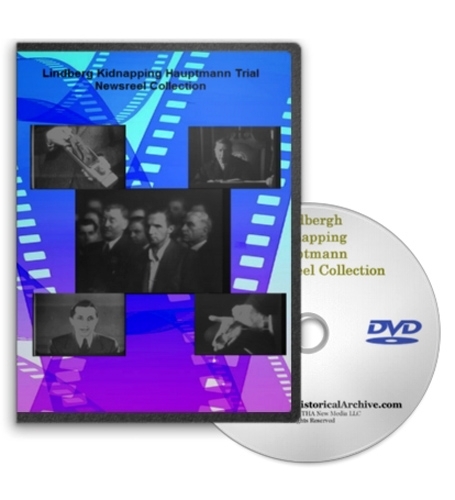 The kidnapping of Charles Lindbergh Jr. occurred on the evening of 1 March 1932. A $50,000 ransom was paid, but the infant was not returned. A corpse identified as the boy's was found on 12 May 1932 in the woods four miles from the Lindbergh home. The cause of death was listed as a very severe blow to the head.

More than two years later, on 18 September 1934, a gold certificate from the ransom money was discovered; it had a license plate number written on it. The New York license plate belonged to a dark blue Dodge sedan owned by Hauptmann. Hauptmann was arrested the next day and charged with the murder.

The trial attracted wide media attention and was dubbed the ï¾“trial of the century.ï¾” Hauptmann was also named "The Most Hated Man In The World." The trial was held in Flemington, New Jersey and ran from 2 January to 13 February 1935. Hauptmann was convicted and sentenced to death.

The six newsreels that make up this collection cover the following aspects of the trial: Hauptmann being identified, Hauptmann bail set, the weapon being found, Hauptmann testimony, State activities to speed the case up and bring it to a conclusion and other scense.

This DVD has a runtime of 15 minutes. The newsreel footage making up this collection is very old and in some instances in poor condition - faded video and static in the audio portions - but still a fascinating glimpse of a sensational moment in history.