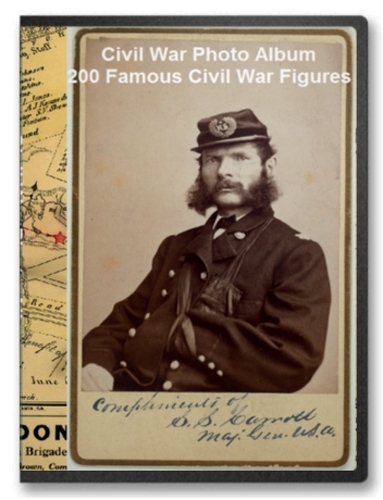 Civil War Photo Album - 200 Famous Civil War Figures on CD - Cartes de visite, miniature portraits used as calling cards, were extremely popular during the American Civil War. These photographic calling cards, approximately 2.5 x 4 inches in size, had been invented in France in the early 1850s, and their popularity quickly spread throughout Europe and eventually to the United States, where the corollary development of the photograph album spurred a collecting craze in the 1860s that became known as Cartomania.

Here are the computer requirements to run and operate this CD. You must have a PC running Windows or a Macintosh running OS X or higher software and a web browser.