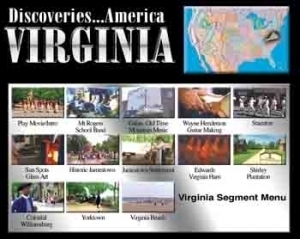 Discoveries...America, Virginia DVD - The sound of guitars, banjos, fiddles and mandolins is what defines rural hill people of Virginia. At Mount Rogers School, students earn credit learning how to play mountain music. Catch a radio broadcast of live mountain music at Rex Theater in Galax, "Mountain Music Capital of the World". Wayne Henderson has been making guitars for more than forty years. His love of music is exhibited in stories he shares while working on his latest instruments. In the Shenandoah Valley the community of Staunton is an historic stop. A local street fair brings a group of dancing "Morris Men" and several artists work at the hot glass exhibition. In Eastern Virginia, history defines the state. The National Park Service's Jamestown Site is where historic remains of America's first settlement lie today. The nearby Jamestown Settlement is a recreation of life in one of America's first communities complete with Indian village, sailing ships and swordsmen. In Colonial Williamsburg, fully costumed characters from the late 1700's interact with tourists. The Yorktown battlefield where George Washington's troops defeated the British in the battle ending America's War for Independence. Modern warriors visit the battlefield to study tactics that are still relevant today. Smoked country hams are one of the hallmarks of the state dating back several generations.