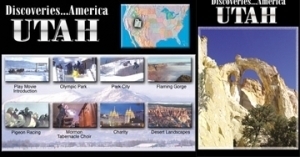 Discoveries...America, Utah DVD - Explore Utah's winter wonderland and see why the state's motto is "the greatest snow on Earth." The 2002 Winter Olympics had a profound effect on the community of Park City and its surrounding environs. Cross-country skiing, bobsledding and ski jumping are just a few of sports that attract millions to the area. Visit Olympic venues that were created specifically for the games and see how they have developed into ‘legacy facilities' for all to enjoy. In the remote community of Dutch John, the Dennis Breer family run a small gas station and fly fishing service for the Green River which flows through the Ashley National Forest. The "Green" is a popular recreational resource in summertime, but in winter, its nearly deserted...follow three legendary fishing guides as they brave frigid temperatures for a "busman's holiday." Racing Pigeons are unique creatures... they will fly home from hundreds of miles after being dropped off in the middle of nowhere. It's a sport that has developed over hundreds of years as the birds have been bred, conditioned and motivated to fly long distances at great speeds. Learn more about these incredible creatures and how they are more than your "typical park pigeon". The Mormon Tabernacle Choir has performed in Salt Lake City since 1847. Their Sunday morning performance is one of longest running regularly scheduled broadcasts in the world. See what goes into the production of "Music and the Spoken Word." Then get a glimpse of life inside the Church of Latter Day Saints and their global charity mission. In the southwest part of the state, a trek through Red Canyon, Kodachrome Basin and Bryce Canyon National Park opens up a world of colored sandstone formations that are some of the most spectacular in the USA.