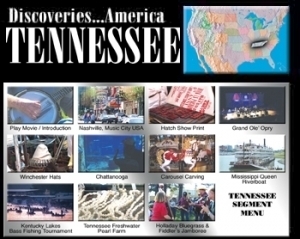 Discoveries...America, Tennessee - Old-time mountain music, bluegrass, country, rock & roll and blues all have deep roots in Tennessee, and Nashville is the city where it's all happening. From struggling street musicians to today's hottest country music entertainers, the city has earned its title "Music City USA". Inside the Country Music Hall of Fame, visitors can take in the music's history, and see some important artifacts of the genre. The Grand Ole Opry is the longest running live radio show in the country – more than 80 years. It's the definitive showcase of country entertainment. Another unique stop in Nashville – Hatch Show Prints – an original wood block printing house makes show posters for a variety of musicians, acts & entertainers. The tools & processes used are the same as in the 19th century, which creates a distinct look that's an alternative to modern digital design. Making hats is big business in Winchester. There are several steps that go into creating high quality hat bodies used to make headwear for police, military forces and other customers. Chattanooga is revitalized with a new waterfront and the Tennessee Aquarium – the largest freshwater aquarium in the world. The incline railway takes visitors to the top of Lookout Mountain and Chattanooga National Military Park. There may not be too many old time carousels as pretty as the Dentzel carousel that graces Coolidge Park across the river from downtown. It was restored by Bud Ellis and his students at the Horsin' Around Carousel Carving School. An authentic, steam powered paddle wheeler, the magnificent Mississippi Queen riverboat is a connection to the state's rich river history. Fishing in the early morning at a bass tournament and a trip to the country's only freshwater pearl farm are two stops in the Kentucky Lakes region. Holladay Bluegrass and Fiddlers Jamboree provides a look and listen to some of America's finest music.