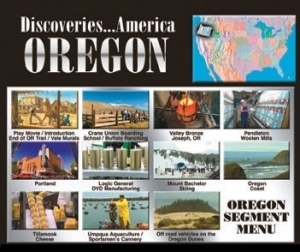 Discoveries...America, Oregon - Oregon is a vast and varied piece of real estate that begins at the Pacific Ocean and stretches across the Cascade Mountains to the high desert plains of eastern Oregon. In Oregon City, the End of the Oregon Trail Interpretive Center celebrates the brave pioneers who came across America in search of their destiny. The trail entered eastern Oregon in Vale where there is a collection of murals that reference various locations along the Oregon Trail. In the remote southeastern part of the state Crane Union, a unique boarding school offers rural students a tight knit community in which to live and learn. Nearby, buffalo ranching with Jim Kelley. The small town of Joseph has transformed into an art center and Valley Bronze creates spectacular metal sculptures. The Pendleton Woolen Mill has been an Oregon tradition for over 100 years. Portland is the largest city in the state and a unique blend of green consciousness and offbeat quirkiness. In December the city embraces the holidays with a parade of lighted boats on the Willamette River. Oregon's high tech industry is very much alive and a tour of Logic General shows the process of making CD's and DVD's for mass distribution. Mount Bachelor provides terrific skiing on the 9000-foot summit of a dormant volcano. Tillamook Cheese is a dairy co-op started in Oregon in the early 1900's. Along the coast, aquaculture and fishing still thrive. At Winchester Bay, Oysters are grown and harvested by Umpqua Aquaculture while fish and crab are canned at Sportsmen's Cannery. The Coast Guard practices exciting maneuvers in the breaking surf nearby. In Siuslaw National Forest, ATV enthusiasts enjoy the Oregon Dunes.