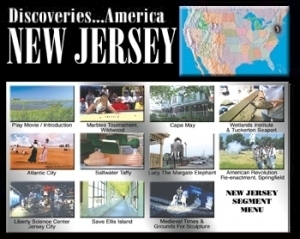 Discoveries...America, New Jersey DVD - Benjamin Franklin called the state a "barrel tapped at both ends," referring to its proximity to the cities of New York and Philadelphia. Remarkably, agriculture is the number one industry in a state known for its population density and industry. The annual Marbles Tournament in Wildwood, NJ brings a collection of skilled athletes from across the country to compete in a game well over 2,000 years old. Cape May is America's oldest seaside resort and a living museum of Victorian charm and architecture. Good seafood, bluegrass and decoys are part of the Baymen's Seafood & Music Festival in Tuckerton Seaport. Atlantic City was one of the first major resort towns in America and continues to thrive amidst the growth of the gambling industry. Its history is reflected in local resident Joseph Polillo's historic postcard collection. It's also the birthplace of Saltwater Taffy and a factory tour shows how the taffy is pulled into its final form. In Springfield, the Brigade of the American Revolution's detailed historical reenactment of the Springfield Battle, brings hundreds of participants and spectators up close and inside the smoke and fire of the American Revolution. Technology and medicine come alive at Liberty Science Center, in Jersey City, where future generations of scientists are engaged and inspired inside the most visited museum in the state. Thanks to "Save Ellis Island", the decaying and abandoned structures on America's island of immigration are being restored and the island's contribution to public health is revealed. In Lyndhurst, dueling knights and Andalusian stallions parade through the spotlights and entertainment at Medieval Times, a colorful and exotic journey to 11th century Europe. Behind the scenes, the trainers, actors and stuntmen work very hard to keep the spectacle safe. In an area mostly industrial, visitors can take a new approach to art by walking through Grounds for Sculpture in Hamilton, a place where nature and art intermingle amidst a serious arboretum.