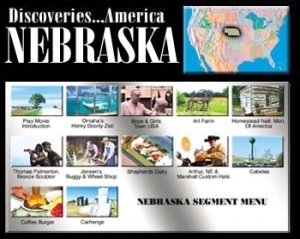 Discoveries...America, Nebraska -  Nebraska is America's 37th State. In Omaha, one of the state's most visited tourist attractions is the Henry Doorly Zoo. Here, spectacular exhibits including desert landscapes, gorillas, polar bears & rainforests. Father Edward Flanagan believed that "there is no such thing as a bad boy." In 1917 he created Boys Town (now Boys & Girls Town) as a unique refuge that offers help, hope & healing to troubled children. Among the corn & soybeans of rural Nebraska, the Art Farm is a summer "artist in residency" program where individual creativity abounds and prairie sculptures like ‘Corn Boy' are the result. An important part of America's westward expansion was the Homestead Act of 1862 & visitors can gain an understanding of how the Act changed the lives of all Americans at the Homestead National Monument of America. Painter & sculptor Thomas Palmerton has always been fascinated by the Missouri River & its early explorers and realized his dream when he was chosen to create a bronze statue for the Lewis & Clark Center. Make wagon wheels the old fashioned way with a father & son team at Jensen's Buggy & Wheel Shop & visit Shepherd's Dairy where sheep's milk is used to create handcrafted lotions & soaps. One of the businesses in Arthur (population 129) is Marshall Custom Hats. The retired cowboy/owner demonstrates a few of the steps that go into creating a custom, hand-made cowboy hat. In Sidney, Cabela's is the largest employer in the western part of the state. The organization became the salvation for a rural community that lost 80% of its jobs in the late 70s. In Harrison, the "Coffee Burger." Nearby Carhenge, is a unique replica of Stonehenge made entirely from scrap automobiles. Over the years the site has grown to include other automotive works of art & sees well over a million visitors a year.