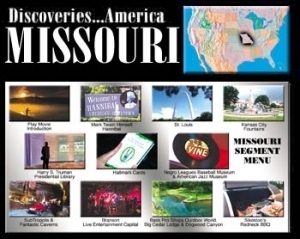 Discoveries...America, Missouri - The town of Hannibal on the Mississippi River was home of one of Missouri's favorite sons, Samuel Clemens...or Mark Twain. His characters come alive in Norman Rockwell's paintings at Mark Twain Museum - his wit never tires during performances of "Mark Twain Himself" by actor Richard Garey. Downriver, city of St. Louis is home to America's most visited National Monument, the Gateway Arch at Jefferson National Expansion Memorial, and visit country's largest brewer, Anheuser-Busch. Harry S. Truman Presidential Library in Independence, is dedicated to preserving the memory of America's 33rd president, who presided over some of the 20th centuries most important political events and decisions. Kansas City famous for sculpture, fountains, jazz, good barbeque and more. The "City of Fountains" boasts more outdoor water features than any other, Rome excepted. Country Club Plaza is oldest outdoor shopping center in USA, it was modeled after Seville, Spain. Two museums in Kansas City highlight African American contributions to the community. At American Jazz Museum, music and artifacts of great jazz icons like Charlie Parker, Duke Ellington, and Ella Fitzgerald are on display. Next door, a different collection is dedicated to preserving rich history of African-American baseball at Negro Leagues Baseball Museum. Since 1910, Hallmark Cards has grown to become largest greeting card company in the world. They produce millions of cards for every occasion and emotion, each one starts with an idea from their creative writers. Deep in limestone bluffs of Missouri River...SubTropolis, largest underground business complex in the world. Over 5 million square feet of leasable space lies beneath ground in its growing network passages and rooms. Another subterranean attraction...Fantastic Caverns, the only drive-thru cave tour in North America. In Missouri Ozarks, a different phenomenon: Branson. The area has grown to one of the world's great live music and entertainment destinations. The shows start at breakfast and go all day, acts like Buck Trent, Jim Stafford and Cirque at the Remington Theater. Big Cedar Lodge is 5 star lakeside resort with 10,000 acres of man made waterfalls, trout ponds and streams in Dogwood Canyon. The Bass Pro Shop in Springfield is state's number one tourist attraction. Seven football fields of hunting, fishing and outdoor-recreation products, displays, artwork, memorabilia and live exhibits bring outdoors inside and show what "shoppertainment" is all about. In Sikeston,annual Redneck BBQ is a down home party with great food cooked slow and easy.