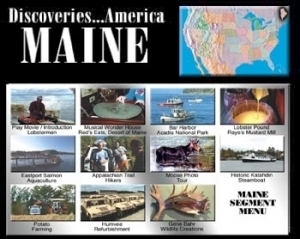 Maine - Maine is a visual feast of cultural and scenic highlights of a state whose wilderness, lakes, rivers and dramatic coastline form a rugged, beautiful environment. An early morning trip to sea with two lobstermen is a lesson in the importance of crustaceans to the state's identity and economy. Local lobster pounds like Trenton Bridge Lobster Pound and Red's Eats are two of the places to enjoy this traditional delicacy. In Wiscasset, an unexpected peek into the Musical Wonder House reveals an astounding collection of beautifully preserved music boxes. In Freeport, you'll find the Desert of Maine, the only desert east of the Mississippi. Bar Harbor & surrounding Acadia National Park are charming, scenic and beautiful even on the most blustery day, which makes them two of the largest tourist draws in the state. In Eastport, tour a salmon aquaculture facility where they monitor the fish with cameras for an effective way to insure proper feeding. A longtime condiment for the area's sardines, Raye's Mustard is still popular enough to be made using the old-fashioned stone ground method from one hundred years ago to produce delicious gourmet mustards. Near Mt Katahdin a group of Appalachian Trail hikers who are almost finished with the trail reflect on their 2000-mile, 6 month journey. The historic Katahdin Steamboat has plied the waters of Moosehead Lake since the early 1900s, during which time it has hauled everything from tourists to logging equipment, and sometimes both. Maine used to be the number one potato producing state in the country and potato farming is still big business here. Although economies of scale have changed it somewhat, potato farming is still a family business and important enough to have its own television show, the Potato Picker's Special, each morning. The Maine Military Authority is responsible for saving the government millions of dollars by refurbishing a variety of military vehicles including the Humvee. A tour of their facility shows what goes into bringing Humvee's back to life with everything from improved suspensions to engine replacement and bodywork. Gene Bahr is a wildlife artist who uses the local basswood to create very unique "catch and release" carvings - amazingly detailed sculptures of fish that are intended to replace the trophy with a beautiful, artistic replica that won't suffer the ravages of time.