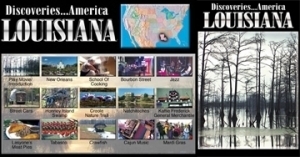 Louisiana - Take to the streets of New Orleans by horse drawn carriage and visit some of the city's most popular attractions including a stop at Café Dumond, the French Quarter & Jackson Square. At the School of Cooking you'll learn as much about history as you will food. In the evening, Bourbon Street comes alive with jazz musicians and tourists. Journey by rail on the country's oldest streetcars past the elegant and historic mansions of the Garden District. Birdwatchers delight in the Creole Nature Trail where dozens of species of exotic birds can be seen including spoonbills and different types of ibis. Reptile lovers can see snakes and alligators on a trip through Honey Island Swamp. Natchitoches is an inland city with a rich history. In the modern age of large discount stores, Kaffie Frederick general mercantile is the rare store that is run the old fashioned way. Tabasco is a product synonymous with Louisiana cooking. Produced on Avery Island by the McIlhenny Company since 1868, the company's founder also created a bird sanctuary on the island. Rice, soybeans and crawfish are important agricultural commodities that are rotated throughout the fields of southern Louisiana each year. Ride along with a local farmer and watch the crawfish being harvested. No tour of Louisiana would be complete without a visit to Acadiana, a part of the state visited by relatively few and understood by fewer. The Liberty Theater in Eunice, LA comes alive each week with performances by some of the best Cajun bands in the world. Learn about the history and culture behind Mari Gras and ride with a local parade through the community of Eunice.