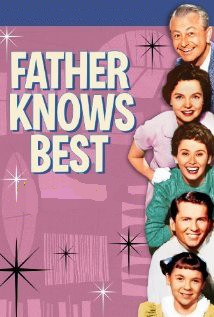 Father Knows Best was both a popular American radio and television sitcom of the 1950s and 1960s, which portrayed an idealized vision of middle class American life of the era.The radio show showed a marked difference from the TV series. Jim was far more sarcastic and showed he really "ruled" over his family. Bud was portrayed as a somewhat dim boy who took everything literally. Jim also took to calling his children names, something common on radio but lost in the TV series; for example, Jim would say, "What a bunch of stupid children I have." Margaret was portrayed as virtually solid reason and patience, unless the plot called for her to act a bit off.