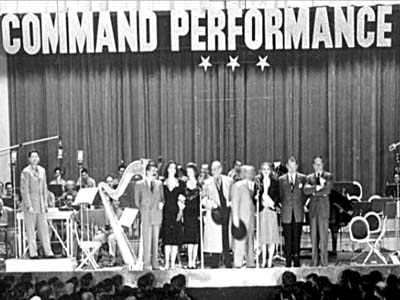 Command Performance - A radio program which originally aired between 1942 and 1949 in the United States. The program aired on the Armed Forces Radio Network (AFRS).As the announcer said weekly, the show aired while troops of the Military of the United States were "over there" in Europe. The premise of the program is that troops sent in requests asking for a particular performer or program to appear. The troops also often requested ideas to be used on the program, such a as a musical version of Dick Tracy or Ann Miller tap dancing in military boots. Many, many top performers of the day appeared, including Jack Benny, Frank Sinatra, Bob Hope, Dinah Shore, Fred Allen, Ginger Rogers, Jimmy Durante and many, many others.

This collection of Command Performance Greats includes 162 different shows and appearances for a total of 90+ hours of listening enjoyment.