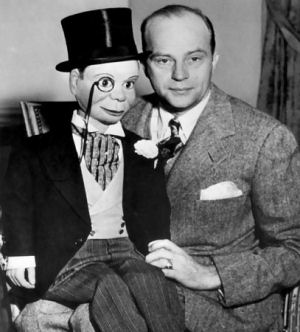 Edgar John Bergen was an Actor, Radio Performer, and best known as a Ventriloquist. His two best known characters were Charlie McCarthy and Mortimer Snerd.His first performances were in vaudeville and one-reel movie shorts, but his real success was on the radio. Bergan and his "dummy," Charlie McCarthy were on the air from December 17, 1937 to July 1, 1956. The popularity of a ventriloquist on radio, when one could see neither the dummies nor his skill, surprised and puzzled many critics. However, it was Bergen's skill as an entertainer and vocal performer, and especially his characterization of Charlie, that carried the show over.