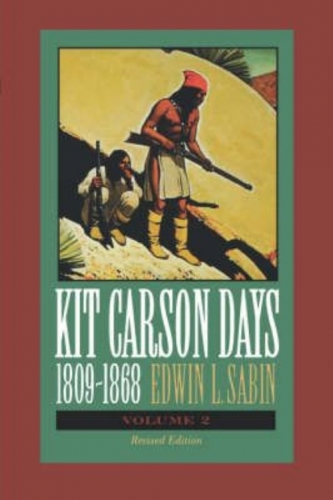 Kit Carson Days, 1809-1868: Adventures in the Path of Empire, Volume II by Edwin L. Sabin - Volume Two of Kit Carson Days begins with Carson carrying the news of the conquest of California across the country to Washinton, D.C., stopping en route to see his wife in Taos, New Mexico. The older Carson consolidates his fame as a courier, scout, soldier, and Indian agent. Americans, avid for newfound gold, turn to him as an authority on trail lore, and the government recognizes his usefulness in dealing with "the Indian problem." Carson is seen against the larger background of incessant warfare in the Southwest after midcentury. He fights the Kiowas at Adobe Walls, chases the Apaches, and forces the Navajos into the Bosque Redondo. He fights in the Civil War and retires at fifty-eight--but dies two years later in 1868.