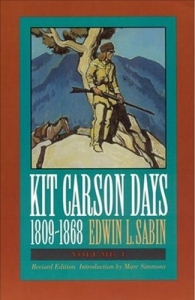 Kit Carson Days 1809-1868: Adventures in the Path of Empire, Volume I by Edwin L. Sabin - Volume One of Kit Carson Days shows Carson running away from his Missouri home at age fifteen in 1826. He joins a caravan headed toward Santa Fe and in the coming years shuttles between poverty and prosperity as a wrangler, teamster, and trapper. He lives all over the unplotted West, helping to open trails, harvesting fur, befriending mountain men, and fighting and trading with Indians. Carson's reputation grows after John C. Fremont engages him as guide in 1842. He proves indispensable to the Pathfinder in three expeditions and plays a part in the Bear Flag Rebellion. The first volume is an encyclopedia of activity in the West during the first part of the nineteenth century, bringing into play such figures as Ewing Young, William Ashley, Jim Bridger, Jedediah Smith, Thomas Fitzpatrick, Hugh Glass, John Colter, William Sublette, Marcus and Narcissa Whitman, William Bent, Stephen Kearny, President James K. Polk, John Sutter, and Nathaniel Wyeth. This revised edition includes vivid chapters on the mountain man, his character, habits, clothing, and equipment.